Search for reports from military courts

While Hava attended the evidentiary hearing of Bassem Tamimi, I walked into Courtroom 4 to check the remand extension hearing of two girls from Um Fagara village, (near Yata) in the South Hebron Mountains who were arrested on 24.11.11.

The background to the arrest: That day the army entered the village with 2 bulldozers and 5 jeeps and demolished two houses (one belonging to one of the defendants) and a mosque, both built without permits [as if inhabitants of South Hebron Mountains, which is in Zone C, could ever obtain a building permit. The purpose of the occupation is to harass the area residents, who are dirt poor, until they leave the area, which Israel covets for its own settlements].

See a film documenting the arrest

See article by Amira Hass on the same subject

The two girls are detained in the Russian Compound in Jerusalem.

The prosecutor presents the judge with the police investigation file where the violation is detailed. the charge is: attacking a soldier 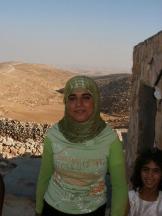 While the representatives of the Civil Administration, together with soldiers and Border Police came to demolish her house, Sausan picked up a stone [later described as a ‘rock’] and hit a BP officer on the hand. Sausan was arrested. Then Amal came on the scene and poured water on the officer.

The defense explained that Amal cannot afford to pay such a sum: she is the daughter of a destitute shepherd, and besides, her house has been destroyed. 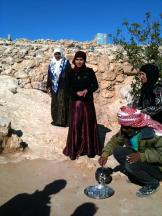 He wanted to know if the prosecution intends to press charges against Amal.

The judge’s decision: He’s willing to consider reduced bail, plus third person Israeli guarantor (me) to insure that the defendant shows up for a hearing, should one take place on 21.12.11.

As for Sausan, the judge stated that according to the police report the defendant held a rock, which she intended to hurl at the BP officer. She was deterred with pepper spray.

The prosecutor moved for a 4 day remand extension to prepare the indictment, but the judge, acceding to the defense, instructed the prosecution to produce the indictment by 14:00 the next day, thus extending the remand by one day.

The judge also ordered the Prison Authorities to provide Sausan with a coat, after seeing the girls shiver, since they were wearing the same clothes they were arrested in 4 days earlier.

I wondered how the released underage girl was going to get home that day, with no money and no proper clothes. My concern proved well founded: She was released from the Russian Compound detention center in the evening. An Israeli friend of the family who inquired where he could pick her up was told to wait for her at Qalandiya Checkpoint. The man waited for 5 hours only to learn later that the girl had been released at Bethlehem Checkpoint. Amal reached home at 10 PM.

The next day, at 2 PM I reported again to the court to find out about Sausan. The judge agreed to release her on a bail that was much higher than Amal’s – guaranteed by the above-mentioned friend of the family. The judge imposed on her a house arrest in Yata. The prosecution, however, requested 48 hours to consider an appeal. Thus Sausan was not released that day.

Her father, who attended the hearing, had brought clothes for her, and so did the family friend.

The next day, I brought the clothes to the Detention Center at the Russian Compound, which was not a nice experience either.

In the end, Sausan was released on Thursday evening. This time two activists waited for her at Bethlehem Checkpoint to drive her home. But they waited in vain, because she was released at Damascus Gate in Jerusalem (thus turning her into an Illegal Sojourner in Israel). A taxi driver took her home.

Thus ends the detention part of the saga of the two girls. We shall wait for their trial.

That day and the next I attended evidentiary hearings in the case of Bassem Tamimi where the prosecution had summoned two minors to incriminate him.

I attach 2 press releases sent by ThePopular Struggle Coordination Committee entitled “I testified under duress” and “We were instructed to incriminate him.”