It’s high time to speak of a certain prison.

Men, women and children live there, surrounded by a wall of houses,
Houses where they were born and which strangers have invaded.
The spaces between the houses are blocked by gates

,
you walk between them
along tracks that are no longer really thorough ways,
calculating your steps between roof and paths, inner courtyards,
or anything you would have defined as a track.
Three manned checkpoints close off life:

Tamar Checkpoint closes the place off from above.

This is a new checkpoint constructed in order to complete the stranglehold around the Palestinian neighborhood of Tel Rumeida and prevent exit, and especially hamper the gathering of friends and relatives. The checkpoint blocks the way to the large mosque and is located right at its entrance. The basic point is to destroy any kind of community fiber that has been achieved. Now even gathering for prayer is controlled by the Occupation forces. The army is everywhere – in earthly matters, in sacred ritual, in public spaces and in the realm of the individual.

Hadassah Checkpoint closes the place off from below, and The Policeman Checkpoint from the side.

The residents of this ghetto, or better yet – sijen – prison, know the rules. They move within them naturally. They know what is forbidden, what is allowed. Mainly what is forbidden. The place makes you cringe. Your movements become measured.
An army jeep may pop up at any point and ask questions.
Then, if they’re not satisfied, three faceless armed and uniformed creatures will disembark and you will have to give a precise account of what you meant.
Forbidden and allowed.

You better find the right roof, or unmarked track that leads amidst entrances to the homes of others and no one will ask and no stranger
could understand.
The people who live on the outskirts of this place do not own the front of their own home. It is barred and locked and belongs to other times.
You are only allowed outside through the back way.
A Jew arriving here may enter with his vehicle, and park only where the commander sees fit. Otherwise a “closed military zone” order will be produced.
“I am in charge here” says the uniformed rank-bearer.
If a Palestinian wishes to invite family or friends living outside to spend time at his home, he cannot. No one living away from here has an entry permit. Not even if it’s a son or daughter born here, whose original home it is.

Unless they were secretly added to the list presented by the Palestinians, “the list” containing only the names of those allowed in. The poet has yet to be published who
wrote – “Take this down, I’m from Tel Rumeida!”

So we entered the prison after driving up Shuhada ghost-street. From the Ibrahimi Mosque Compound – Cave of the Fathers – that has become a military compound, all the way to Hadassah House. A soldier allowed us to enter with our car. The street was totally empty. Shut down. No one in sight, nor any car. Only soldiers on both sides. “Hadassah House” at one end and “The Policeman” or “The Container” at the other.
Everything that was once a shop or dwelling is locked and shut. For years now. And serves as a setting for a horror film. Parking in the deserted street only because you are a Jew is a harrowing experience. The woman born here who accompanies us on our tour says “I’m not allowed” in answer to any question asked. She knows all those who have remained, living in the deserted houses. She comes with us from one home to another.

We are in the part of Shuhada Street where its last remaining residents still live.
In one of the houses an 80-year old woman resides alone. Her home is tidy, furnished and clean, its walls dilapidated. 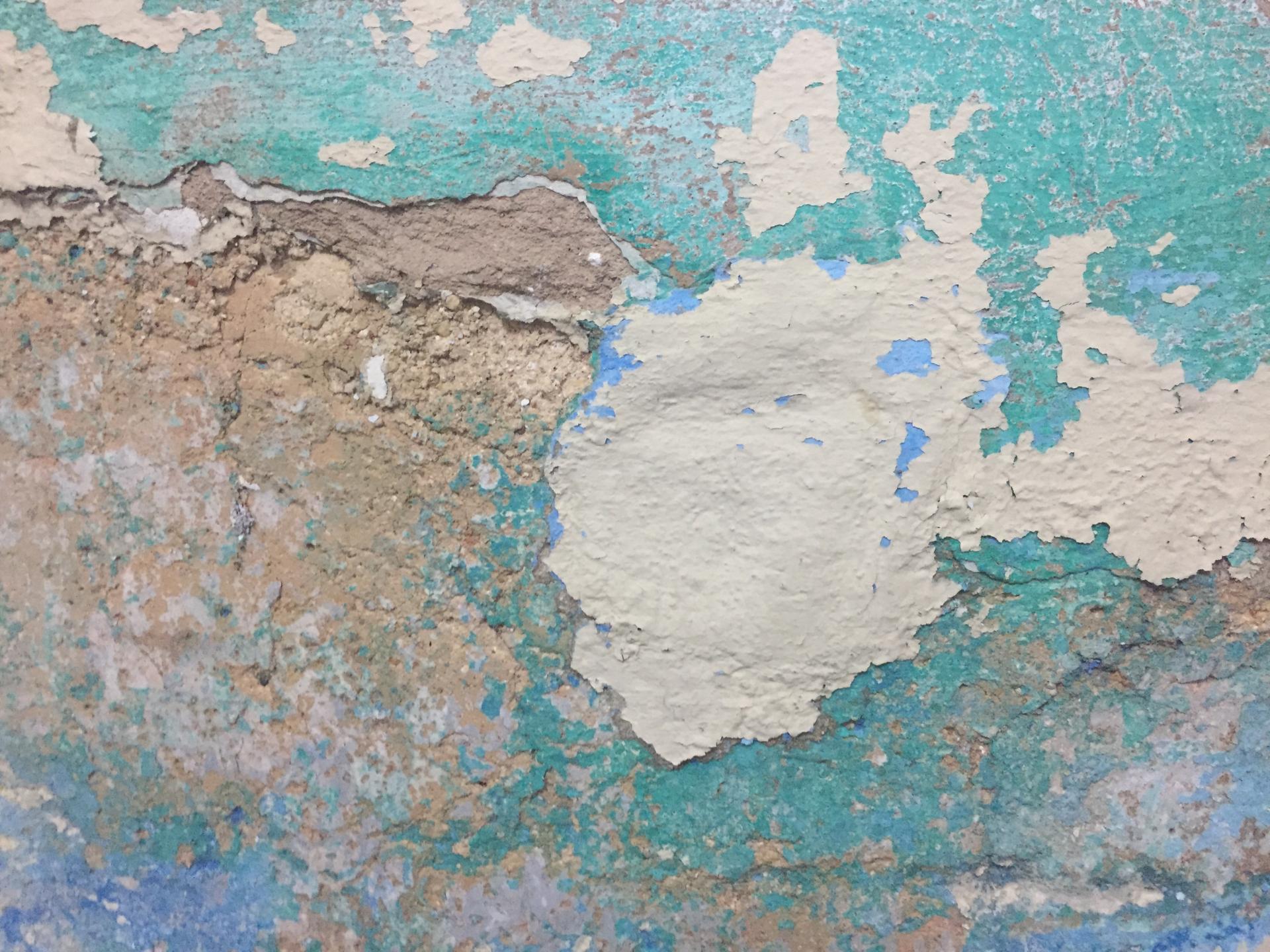 Her daughter, living in another neighborhood, comes daily to take care of her needs, she has been lucky enough to be on the “list”. Other siblings are not so fortunate.

This daughter worries. Her mother is alone most hours of the day and night. Most of the neighbors have fled. The windows are barred for fear of the settler-colonists and their children who are in the habit of throwing stones and bottles occasionally, or wildly banging on the door.
The “list” is only for first-degree relatives. Sons and daughters. However, some of them refuse to be on it and subject to the Israeli army’s graces. At times, refusal is a form of resistance, at others fear is the cause. In any case, they cannot take care of their old and ailing parents. And they cannot gather for festivities nor for mourning in their own family home, where they were born.

The house next door is inhabited by a family that runs a kindergarten one roof away, to which climbing is forbidden by the steps leading up from Shuhada Street – if one is Palestinian. There are hidden ways to reach the kindergarten. One of them is through the roof. And the roof, like other roofs, is not quite a track. It’s like crossing a river on stepping stones that happen to be there, and they’re not, one might just slip. Or not.
In the kindergarten merriment reigns. For children are always merry.

Even when they’re small, even when they’re afraid as they must cross between the soldiers and the violent settler-colonists (Noam Federman, Baruch Marzel and their ilk) and climb the broken steps leading to the kindergarten, unaccompanied by parents.

They were born into this. So have their mothers, been born at various phases of this place turning into one big prison.

Further on, near the kindergarten, is the elementary school (up to the 9th grade), called Kartoba (Cordoba).

R., our accompanier’s 11-year old daughter crosses The Policeman Checkpoint every morning because she is on the “list”, so far still living with her family inside the “sijen” (prison). They have now purchased a house outside, but registration has not been updated. So she crosses that checkpoint every morning, afraid of the dog that might bite her, as had already happened to her once. The checkpoint doesn’t scare her. She has grown used to it. She joins us for the trek that fills up with details with every moment that passes. We enter a house with a lovely front, its interior furnished, handsome and respectable, and are warmly welcomed. Grapes, peanuts, pistachios and a woman so glad to meet different Jews (different from the settler-colonists and soldiers she sees there habitually). So glad it is heart-rending. And the two tell us about the Jews from PsychoActive organization who come there to be with them, and they try to explain to us how their everyday lives are run. Where they go, how far, what track to take, and clearly she cannot carry her stuff from Palestinian-controlled Hebron all the way to their “Sijen’ (prison) and needs someone to help her along the way.

It takes an hour to go shopping for the most basic stuff, an hour if one wishes to pick up a child from kindergarten or school. The shorter way is blocked by fences and rife with soldiers.

Her children? Whoever could, left. They moved to East Jerusalem, to Beit Hanina. One is a chef, another a baker, a third does something else. Yes, they want to come back. Someday. We wanted to see the new checkpoint. “The latest epitome” that brought us here. To understand why a civilian neighborhood – excuse our language, who is a civilian here? Why is a human residential neighborhood closed off from the outside world? What have its inhabitants done, what crime have they committed? Well, ask Baruch Marzel (the local settler-colonist bully) and his wife Sarah. She too is called Sarah. Who are stuck right here on our hostess’ street. Ask the gang in Hadassah House on Shuhada Street. Ask the settler-colonists on the hill above who close off this neighborhood as if it were a military base. Next to which cars are not allowed to park. Ask them. Perhaps someone might answer. I didn’t find any answers. I couldn’t muster up the strength to ask.

Whoever has parents living in the neighborhood, who are not likely to ever leave, is registered on the “list” and gave us a winding historical account of what happens to someone who thinks he may, no matter what. He who has the strength. Since 1967 through the Baruch Goldstein massacre (the Jewish doctor who gunned down dozens of Muslims praying inside the Ibrahimi mosque) and until now. This is no explanation. It’s the account of a cruel, heartless, mindless occupation. 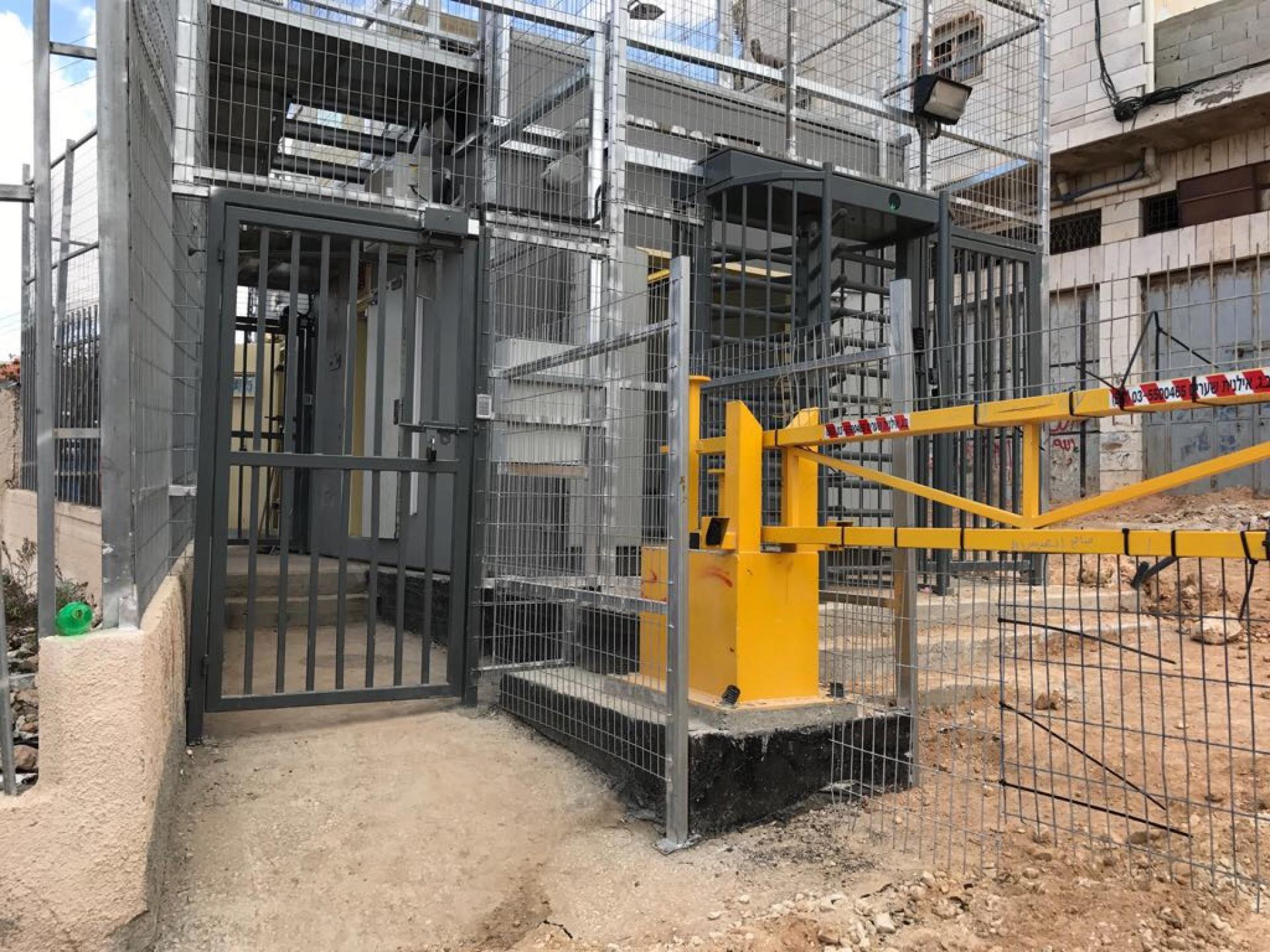 The Jews have discovered another lovely spot, up on the hill, next to a centuries-old olive tree grove – a water cistern.

Today two soldiers are already sitting next to it, naming it “Forefathers’ Legacy” in large letters, on a sign. And there’s already a fence. And stones.

Nearby lies a cemetery of Hebron’s oldest families. It too is torn from the community. Families may no longer visit their loved ones nor pay respect to their forefathers’ graves. One law for Jews, another for Arabs. From up the hill we observed the destitute Shuhada street and the ruins of the Old City, the locked houses and the shut-down shops. But next to A.’s home a Palestinian flag flew proudly, and anti-occupation graffiti welcomed us.

As we have taught ourselves for some years now, in our organization, instead of crying or yelling, we went along with our guide who led us from spot to spot and hugged and kissed all who came along, and they all greeted her the same way, and were friendly to us. No anger, nothing. We thought what we are going to do together. 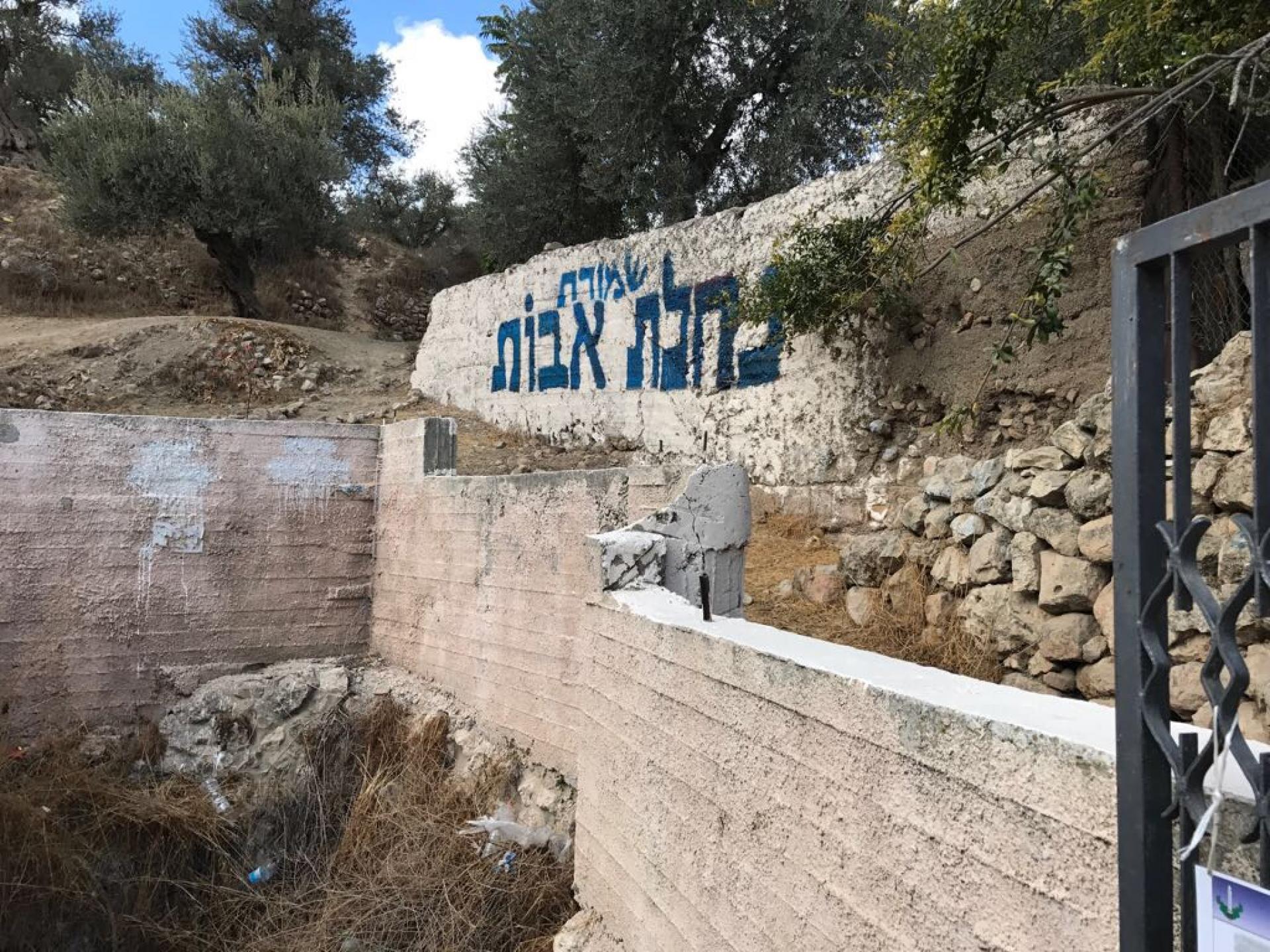 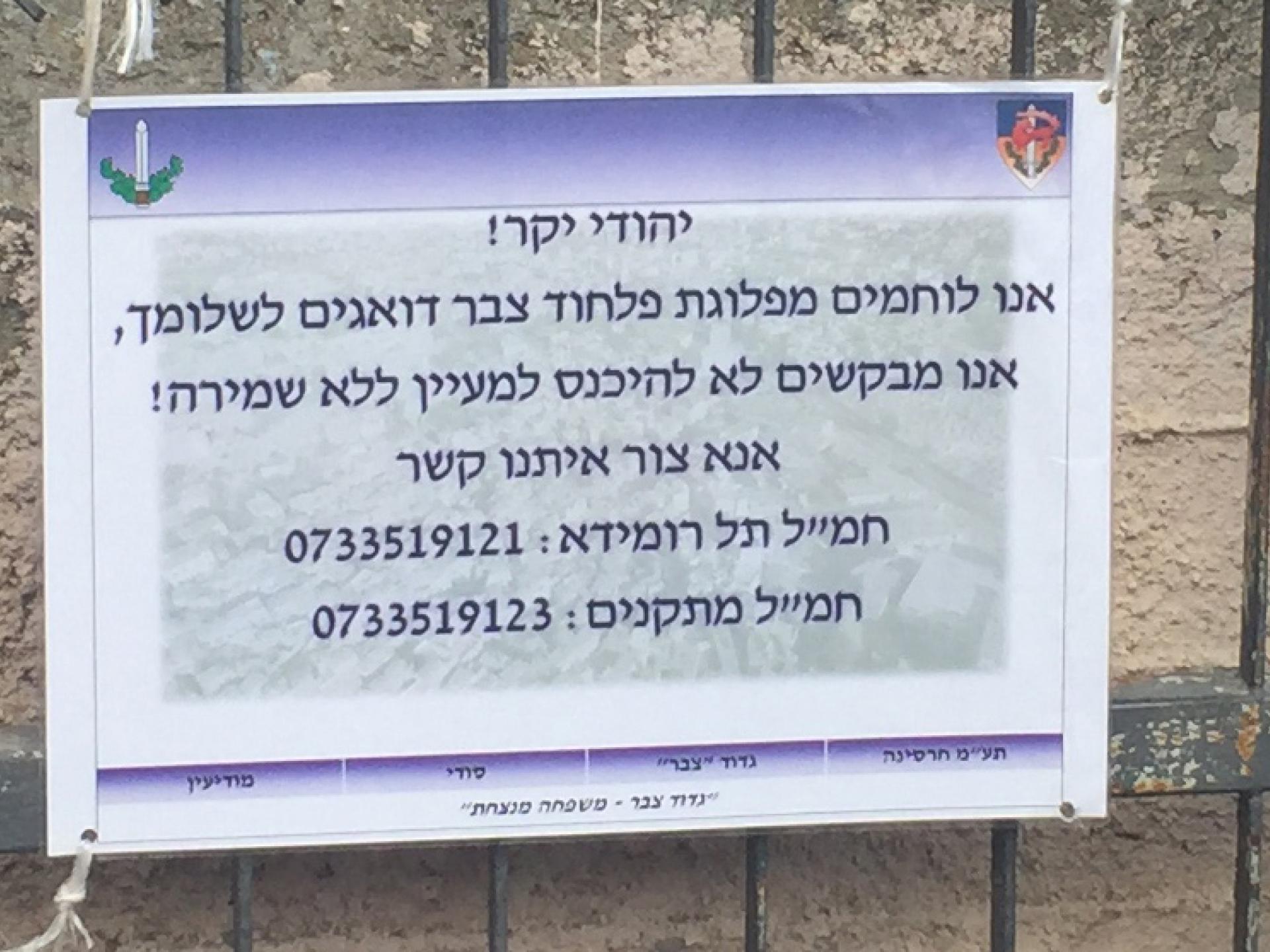 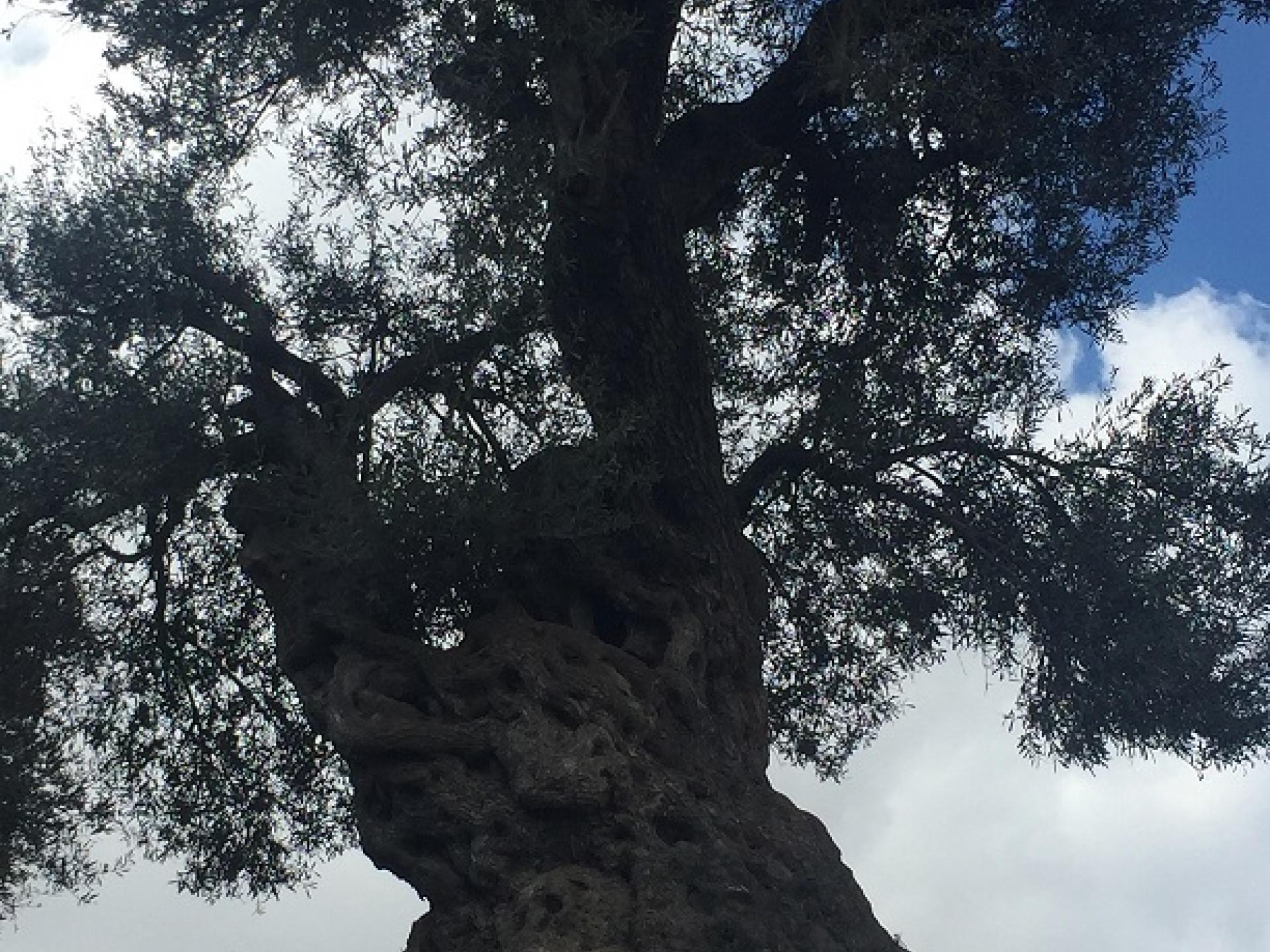 According to Wye Plantation Accords (1997), Hebron is divided in two: H1 is under Palestinian Authority control, H2 is under Israeli control. In Hebron there are 170,000 Palestinian citizens, 60,000 of them in H2. Between the two areas are permanent checkpoints

, manned at all hours, preventing Palestinian movement between them and controlling passage of permit holders such as teachers and schoolchildren. Some 800 Jews live in Avraham Avinu Quarter and Tel Rumeida, on Givat HaAvot and in the wholesale market.

Three checkpoints around the Tomb of the Patriarchs 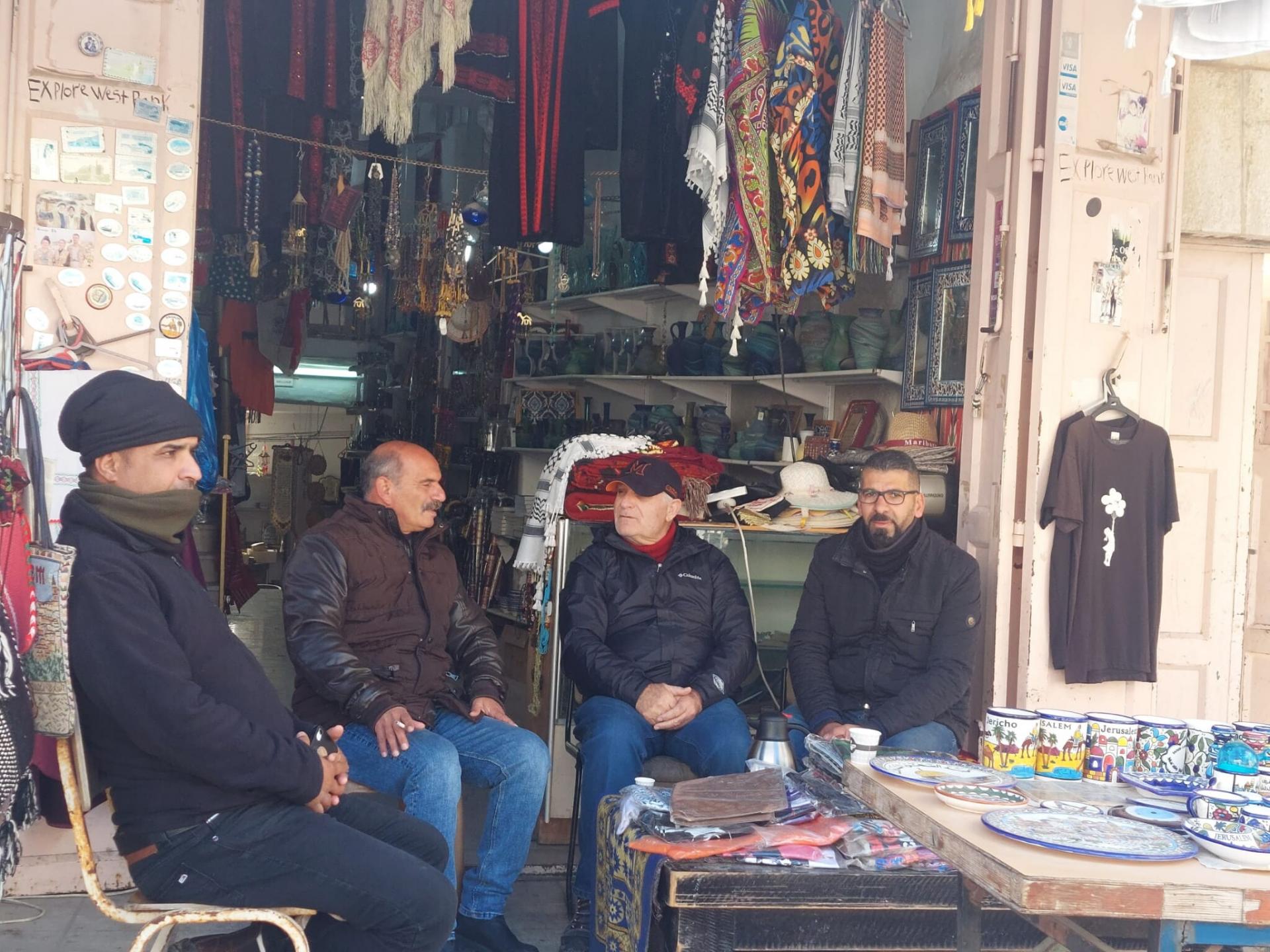 Hebron – in front of Abed’s shop