Habla Checkpoint - prevention of seedling transfer to the hothouse

We decided to come to this checkpoint following a conversation of Nina with 'A, who said that recently there have been problems with bringing merchandise over.  We came early and, at the entrance to the nurseries, we saw an armoured vehicle which was also there when we left, and beside it a male and a female soldier.  A little further on the damaged road which leads to the checkpoint we saw a male and female soldier walking slowly, for the first time since we have come to this checkpoint.  We parked not far from the checkpoint and they came over to us and expressed interest in what we were doing there.  We explained who we are and what we are doing and Nina inquired what they were doing.   They said that there had been infiltrators through breaks in the fence who joined the people going through the checkpoint and were swallowed up among them.  They job was to identify them.  Nina:  man-hunters.  Why don't they simply patch the holes in the fence - but the gods of the checkpoint have their own solutions.

7:00  'O is already there, the soldiers arrive and open the gates

slowly.  At the exit from Habla, those waiting for the opening of the gate crowd together.

7:10  The gates aren't yet open and one of those waiting collects the papers of the drivers waiting there and brings them all together to the soldiers.  One of the soldiers verbally updates the female soldiers​ at the booth near us ​about this.Now the middle gate is also open.

7:15  The first group of 5 enters for inspection.  Near us, behind the shed, we hear a donkey bray - he was left there tied to a cart all night.  His owners will come later and take the donkey and cart into the village.  The first 5 pass through the inspection.

7:20  The first car goes through, after it a number of carts, more than usual, some of which are drawn by donkeys and some by horses.

7:30  The checkpoint is full of people and vehicles.  Really lively.  Four women go out in a group - and the pedestrians stream by and next to them, the bicycle riders.  The soldiers take a helpful step:  Some pass through the building and some are sent to the post of the female soldiers to get their permits.

7:45  Begins to empty.  No more vehicles are to be seen  and the number of those waiting is very small.

At about 8:00 there was an awakening - pedestrians and cars from Hablah.

At a conversatin in the nursery, he complains.  They told him that there was a prohibition on bringing merchandise through this checkpoint and it has been declared an agricultural crossing, not a merchandise crossing.  'A maintains that, in any case, they are only bringing through agricultural materials - plants and equipment for the nurseries like irrigation hose, not really merchandise.  But the officer at the DCO declared that the decision had been taken "higher up".  'A says that there had never been an incident of terrorism that passed through this checkpoint and therefore it was not reasonable why there was this new restriction.  They want to work peacefully and the new regulation makes it very hard for them since now they must put all the plants on platforms on only one level and, at the Eliyahu checkpoint, they had to take apart everything on the inspection platform.  The inspection process was slow and greatly delayed the passage of the trucks with the plants.  They operate a machine there which lowers the agricultural platforms and each one is inspected separately...On Fridays and Shabbat it is forbidden to bring in merchandise.  At the crossings, it is forbidden to bring even empty boxes.  Every inspection takes a long time.  W, a truck driver, complained about this and, on the next day, he was punished and waited 5 hours for the inspection.  'A and others complained at the DCO and claimed that the inspection was harming their business (among other things, payment for increased hours of work time, hours of use of the trucks which were increased and many other increased expenditures).  They complained to the DCO officer that the well-funded Israeli army could bring forklifts and dogs to the Habla checkpoint, to lengthen the time of the opening of the checkpoint (I don't understand this section).  He also told him that, when they put up the fence they did not take into account the properties of the Palestinians and that there were places where the fence actually divided the area of the nursery, some of it being on one side of the fence and the rest on the other side.  The fence itself was the source of the problem.

He described for us the process which the checkpoint had undergone:  First, the gates were entirely open.  Little by little, they began to close them and open them several times a day at defined hours.  Afterward, they added to the process the entry permits.  This process took years and was very gradual, but now had reached its limit.  The pressure on them keeps getting worse in order to force them to stop working their lands at all.

In place of this, 'A suggested that they bring their goods through the Irtah gate which is accustomed to the quick passage of goods, even though it is far away.  The officer refused and said that the passage of goods there was only into Israel.

This is Palestinian land.

The DCO officer promised to pass the problem along further up.

'A said in addition that they fear the Israeli Administration which could cancel their various movement permits.  They restriced them in many ways:  they are required to bring through only small plants, they are forbidden to bring tall plants.  This causes difficulty and damages their business.  The small plants are cheaper than the tall plants, another blow to their income.

'A complains that some of the soldiers who do the inspection even when he is only bringing drinking cups, or a bag of pitot for his whole crew, and finishes up:  we are losing all hope, even the bit we still held on to for a better future.

The Habla checkpoint (1393) was established on the lands of the residents of Qalqilya, on the short road that connected it for centuries to the nearby town of Habla. The separation barrier intersects this road twice and cut off the residents of Qalqilya from their lands in the seam zone.(between the fence and the green line).
There is a passage under Road 55 that connects Qalqilya to the sabotage This agricultural barrier is used by the farmers and nursery owners established along Road 55 from the Green Line and on both sides of the kurkar road leading to the checkpoint.
This agricultural checkpoint serves the residents of Arab a-Ramadin al-Janoubi (detached from the West Bank), who pass through it to the West Bank and back to their homes. The opening hours (3 times a day) of this agricultural checkpoint are longer than usual, about an hour (recently shortened to 45 minutes), and are coordinated with the transportation hours of a-Ramadin children studying in the occupied in the West Bank. 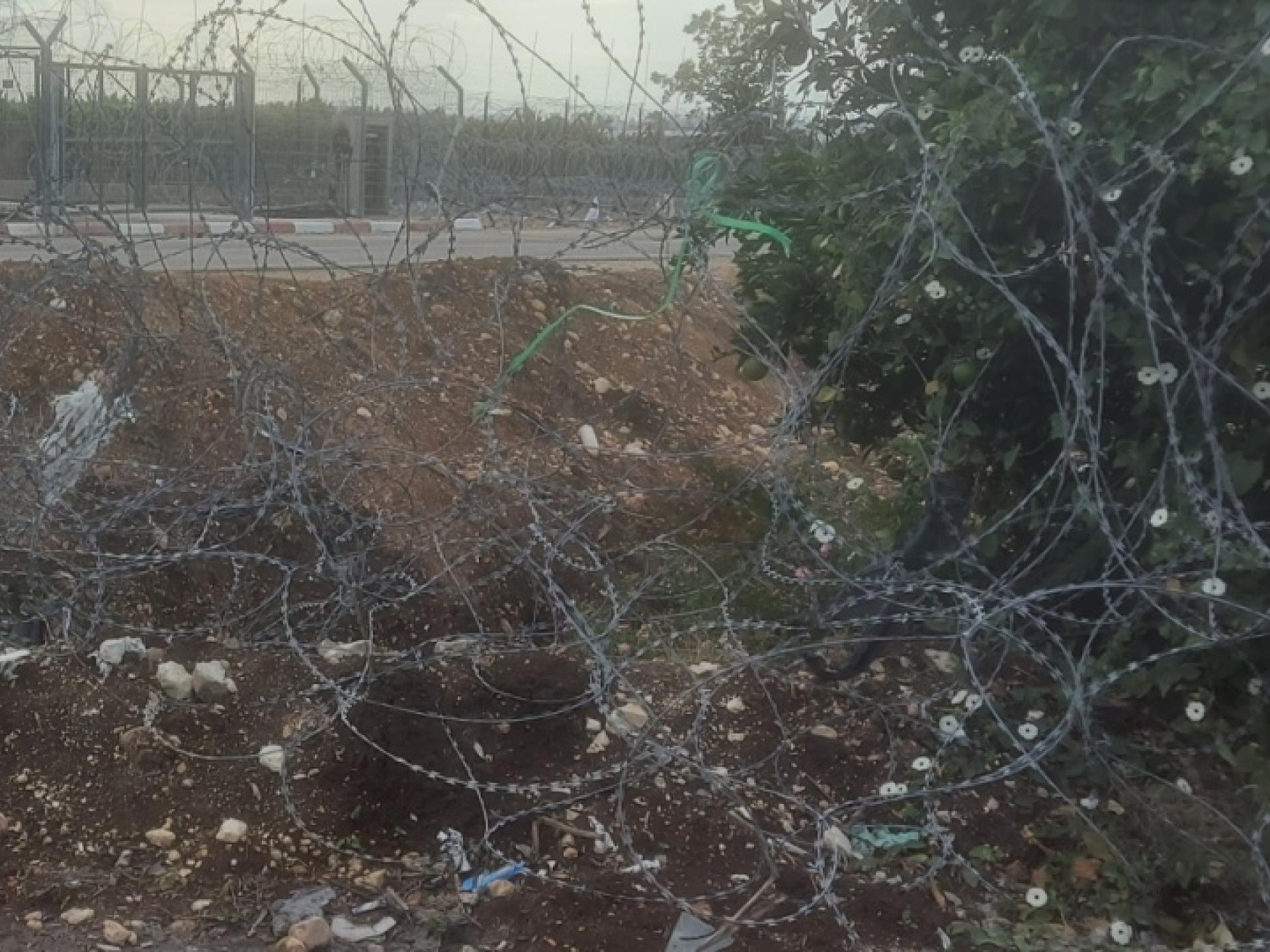 Habla - No more breaks in the fence. All holes have been sealed.